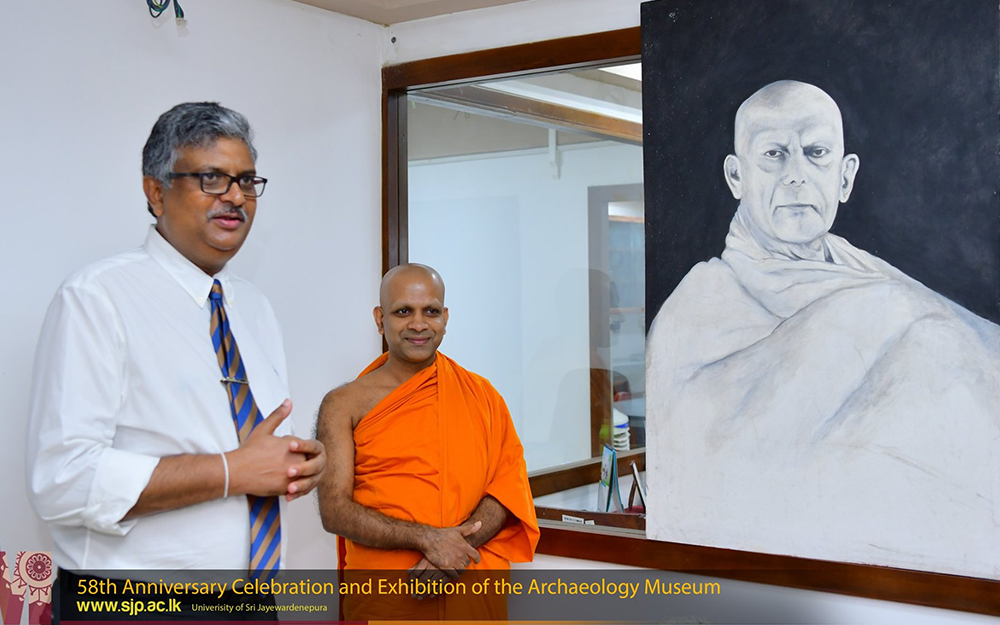 A museum is an important educational institution that is respected by people all over the world. As such, many people are always interested in visiting the museum. It shows the pride and dignity of its country through a museum. Also, a museum reflects the past human civilization. The main collection of a museum is the collection of artifacts.

The museum was officially open on October 28, 1962, and it brings to the fore the concept, the passion, and fortitude of the Vice-Chancellor Most Venerable Weliwitiye Soratha Nayaka Thero. It has been proved by the Most Venerable Sri Soratha Thero’s remarkable visionary that this was of great use to the students of archeology and history. A large hall in the Sri Sumangala Library has been allocated for an archaeological museum, according to the journal published in the Vidyodaya University of Ceylon. Mr. Leelananda Kaldera has been appointed as an exhibitionist with extensive experience in museum administration, specializing in numismatics and archeological excavation and also he has served as an assistant lecturer at the University. It is very clear that the work is being carried out in a proper manner and in accordance with the principles stated in the statement “It will be very useful to the students of this department when the museum is completed with scientifically placed of artifacts etc.” Thus it is clear that the Archaeological Museum of the Vidyodaya University was in the forefront as a university museum which was started following the principles and guidelines of the museum.

The heart of a museum is the collection of preserved objects in it. Among the valuable antiquities are in the museum a four-and-a-half-foot-long Sigiri portrait, a fourteen-page copy of the 1815 Sinhala English Covenant (Kandyan Convention) from the State Archives, Roman, Portuguese, Dutch and Indian coins, coin-making molds, and created models of famous Khajuraho Group of Monuments in India, parts of sculptures of wood, the part of a historic human skull found in the Pahiyangala cave, rock relics found at Abhayagiriya, Collection of models donated by the High Commissioner of India demonstrating the excellence of Indian art in the era of Mohenjodaro Harappa and contain many artifacts including exotic tiles, carvings and clay tablets. The Japanese tile, which survived the Hiroshima Nagasaki disaster at the museum, is a reminder of the horrors and tragedies of World War II. Ven. Kamburupitiya Thero’s exploration related to the Ambalantota area has yielded several important items. These include idols, ancient earthen lamps, etc. The fragment of statues of Avalokiteśvara Bodhisattva cannot be found anywhere in Sri Lanka. The models of such important items were made of plaster. It is said that Mr. A. Ratnapala, a trained officer has prepared many such models and has obtained resources from the Colombo Museum. It is revealed that the Archaeological Museum of Vidyodaya University has taken steps to recreate the artifacts.

Professor K.M. Alexander who was Head of the Department of History and Archeology, Archeologist, spearheaded the establishment of good administration by introducing efficient and necessary services of the Archaeological Museum in a time when it was not a priority and a focus. He took steps to restore the post of Museum Curator that was vacant at the time. As a result, in 2017, the former head of the National Museum’s Conservation Division, Mrs. N.M.P. Neththasinghe, was appointed as the new “Museum Curator”, for the Vidyodaya museum. Accordingly, it is the beginning of a new phase of development. It is no secret that the Archaeological Museum was fed up with the experience of the Head of the Department and the experience of the Museum Curator. The Archaeological Museum was re-initiated and restructured and was spearheaded by Prof. Sampath Amaratunga, the current Vice-Chancellor of the University of Sri Jayewardenepura. Dr. D.P.S. Chandrakumara who was the former Dean of the Faculty of Humanities and Social Sciences, Professor K.M. Alexander Head of the Department of History and Archeology, Museum Curator, the faculty staff Including senior professors, consultants and designers were among those who supported him in carrying out the project in several stages.

The museum building was designed with all the necessary features including a lecture hall, a new conservatory, a repository, and a gallery. The first phase of the project was renovated as the museum’s office, entrance hall, memorial gallery of venerable Weliwitiye Soratha Nayaka Thera, pottery, architecture, paintings, statues, and prehistoric compartments. It is fortunate to have the guidance and resourcefulness of the National Museum’s Superintendent Mr. Susev Ranjith Hewage, who helped to develop the new electrical circuit system, Gallery Lighting, and Designing.

Prof. Shirantha Heekenda, the new Dean of the Faculty of Humanities and Social Sciences, looks forward to the ongoing reorganization of the museum and is keenly looking forward to further work. It should be noted that the Curator of the Museum plays a pivotal role in this. In addition to maintaining the museum’s collection of materials in accordance with the principles and guidelines of the museum, the necessary paperwork is carried out in a very scientific and accurate manner. Registration of artifacts classified under seventeen categories is carried out with regards to index registration, documentation, updating of data file, proper storage, preservation, and conservatory. Piyumi Pramodini Kandanearachchi who is pursuing a special degree in Archeology from the Department of History and Archeology of the University of Sri Jayewardenepura assists in the training of the trainees. Today, the progress and development of the museum have been witnessed by the scholars who visit the museum.

This museum also provides students with the opportunity and space to carry out required studies and improve their knowledge by conducting research and provides knowledge for the individual and group activities of the subject by organizing museum exhibitions and lectures. The objective of this museum is to open up the museum to all the university students and the general public and to create the space and environment for them to make use of the advanced facilities.

The University of Sri Jayewardenepura Museum of Archeology is celebrating its 58th birthday today and the university is in a much better condition than it was at the beginning. It also aims to create a learning environment for the next generation with a wider scope.