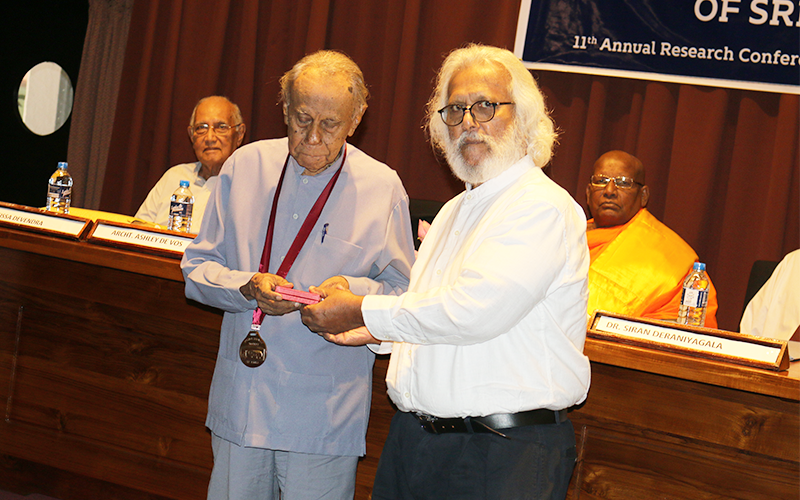 It is a rare honour for the Sri Lanka Royal Asiatic Society to have had the opportunity to award S. C. Obeysekere Memorial Gold Medal for the year 2018 to Professor Emeritus Wimal Gunesekera Balagalle, an eminent, erudite scholar, a well- known linguist as well as an expert in Sinhala, Pāli, Prākit, Sanskrit and Bengali languages.

Born on the 24th of November 1924, in the village of Balagalle in the Gampaha District, initially he attended Ullapola Vidyātilaka Boys’ Buddhist School where he completed the GSC with first class honours. He also won the first place at a national creative writing competition for his short story ‘Väradī Giya Upakramaya’ (A Failed Plan) showing his early predilection for literary creativity. He entered the Pallēvela Vikramaśilā Pirivena in 1938 to continue his post-secondary education. While he was engaged in his post-secondary education, he also visited the Sarasvatī Pirivena where he had the opportunity of associating himself with Venerable Hissällē ÑāÆodaya who introduced him to classical languages instilling in Balagalle an interest in pirivena education. The next turning point in his life was in 1945 when he entered the Vidyōdaya Pirivena at Māligākānda for higher education. Here, he was tutored by well- known Buddhist scholar monks such as Baddēgama Piyaratana, VäliviÔiyē Sōrata, Palannoruvē Vimaladhamma, Venerable Dr. Dehigaspē Paññāsāra, Kalukoňdayāvē Paññāsēkhara. He went on to perform exceptionally well in Sinhala, Pāli, Sanskrit and Prākrit languages as well as religious studies, logic, prosody, rhetoric, history and archaeology. He concluded his pirivena education with the ‘Śyāmarāja’ Award, a special prize awarded by the King of Thailand. He sat for the final examination in Prācīna Pandita in 1950 and was awarded the Gold Medal in Prācīna PaÆ±ita for his exceptional performance, and obtained the first Order of Merits as well as the highest marks for the subject at this examination in 1949 conducted by the Oriental Languages Society. He is the only individual to have achieved this rare academic feat and this record remains unbroken to this day.

In 1950, he went on to obtain his Pandit Diploma (O.S.S.). Subsequently, he entered the University of Ceylon (Colombo & Peradeniya) in 1952 and was conferred the BA Honours Degree in Sinhala in 1956, after which he was recruited to the Vidyōdaya Pirivena as a member of the academic staff. Young Ballagalle worked very closely with the Chief Incumbent of the Vidyōdaya Pirivena, Venerable Välivitiyē Sōrata Thera at a time of religious and cultural revival in Sri Lanka. Subsequently, when the Vidyōdaya Pirivena was granted university status on the 19th of February 1959, young Balagalle was appointed as a lecturer in Sinhala and the Registrar of examinations of the University. He was promoted to the post of Professor in May of the same year. He was the Head of the Department of Sinhala from 1959 to 1964, the Dean of the Faculty of Languages from 1964-73, the President of the Vidyōdaya Campus from 1973-74 and finally the Dean of the Faculty of Arts from 1975-90. During his tenure as Head of the Department, he recruited many young academics who went on to become well-known scholars in the field of oriental languages and studies. Among them, Professor A. V. Suraweera, Professor Vinnie Vitarana, Professor Nandasena Ratnapala, and Professor T. B. Kangaharachchi stand out. He has been awarded a number of international fellowships. First amongst them was awarded by the University of London, from 1961-63 and the University of Washington, Seattle, USA, from June – August in 1963. He also had the opportunity of being a Collaborator of the Critical Pali Dictionary complied by the Royal Danish Academy of Sciences & Letters, Copenhagen, Denmark in 1963. In fact, there are a number of Professor Balagalle’s articles published in the second volume of this publication.

He was also the Chief Editor of the Vidyōdaya: Journal of Arts and Letters since 1982 for five consecutive years. During this time, he played a central role in the compilation of a publication consisting of over forty research articles in celebration of the University silver jubilee.This is a true testament to his engagement and involvement in research activities of the University. Professor Balagalle has been an active member in various departmental committees, the Faculty Board (which he continues to be a member of even today), the University Senate as well as the Council and other research committees from the inception of the University of Sri Jayewardenepura. It is a well- known fact that Professor Balagalle is the sole authority when it comes to the history or any other important information relating to the University of Sri Jayewardenepura. He is often consulted in matters relating to administration and academic activities. Even today, the University of Sri Jayewardenepura and other Sri Lankan universities, Oriental Studies Society, The Department of Examinations, The National Institute of Education seek the advice and guidance of Professor Balagalle in many of their academic and administrative matters. In addition to his academic engagements, he is involved in a number of external academic and literary committees. He worked as the Chief Editor of the Sinhala Dictionary from 1994 to 2002 and currently works as the Chairman of the Sinhala MahÁvaÞsa Compilation Committee. In addition to his engagement in the field of education, he has contributed extensively to the development of linguistic studies in Sri Lanka. The number of books and other publications by Professor Balagalle bear ample testimony to this. His first book, a Sinhala translation of the fifth book of Pañcatantra together with a commentary was published in 1950 followed by The Life of Saranankara SangharÁja in the following year. He won the UNESCO literary award for his translation of the Record of the Buddhist Kingdom by Fa Xian which was published in 1958. In 1964 he published A Critical Edition of SiÞhala ThÚpavaÞsaya which he co-edited with Professor Vimala Vijesuriya. He was awarded the State Literary Award in 1995 for Language Studies and Sinhala Usage and in 1998 for the publication The History of the Studies on Sinhala Language. Amongst his many scholarly works, The Origin and the Evolution of Sinhala Language (1992), The Foundation and the Development of Sinhala Language (1996), Sinhala translation of the “Linguistic Characteristics of the Sinhalese” by Wilhelm Geiger (2001), Essays on Sinhala Linguistic Studies – I (2004) are exceptional. As far as his academic publications are concerned, a special mention must be made of the History of the Sinhala language and Historical linguistics. Furthermore, in addition to journal articles and literary reviews he has a large number of scholarly articles to his credit. “Semi-nasal Characters in Sinhala” (in Samskriti : D. E. Hettiarachchi Felicitation Volume,1983); “History of Sinhala Literature Interlinear Inscriptions” (in Samskriti : 17, 1983); “Modern Theory of Semantics and Semantics Theory Practised in Ancient India” (in G. B. Senanayake Felicitation Volume, 1985); “Some Notes on Theory of Literary Studies and Semantics diffused in Ancient Sri Lanka” in Vidyōdaya: Special Issue on Commemorating Ven. VäliviÔiyē Sōrata Thero, 1978).

Prof Balagalle recently (in 2014) published a book entitled Linguistic Communication and Semantics and Pragmatics. This is the only book published in Sinhala on the areas of semantics and pragmatics in Sri Lanka. The most notable fact in relation to this publication is that Professor Balagalle produced this academic work at the age of ninety, a fitting example to his continuous engagement in academic work.

In addition to his research articles in literature, education, literary criticism, traditional culture and history, the most significant are the publications on linguistics and Sinhala grammar, simply because there is no other scholar in Sri Lanka who has written extensively on this topic as Professor Balagalle.

In recognition and appreciation of his academic contribution and service, the University of Sri Jayewardenepura conferred an Honourary Doctorate on Professor Balagalle in 1984, and a second Honourary Doctorate was conferred upon him by the Buddhist and Pali University in 2008. In 1990, Professor Balagalle was conferred the title Professor Emeritus by the University of Sri Jayewardenepura. Professor Balagalle is a scholar like no other. Scholars who have achieved such levels of academic prowess as he has are very rare and scarce amongst us today. Therefore, the Royal Asiatic Society of Sri Lanka takes great pride in awarding S. C. Obeysekera Memorial Gold medal for 2018 to Professor Wimal Gunasekera Balagalle in recognition of his rare academic accomplishments. 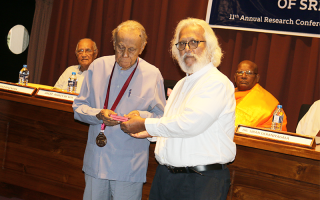 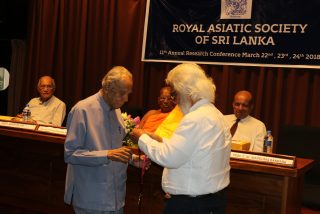 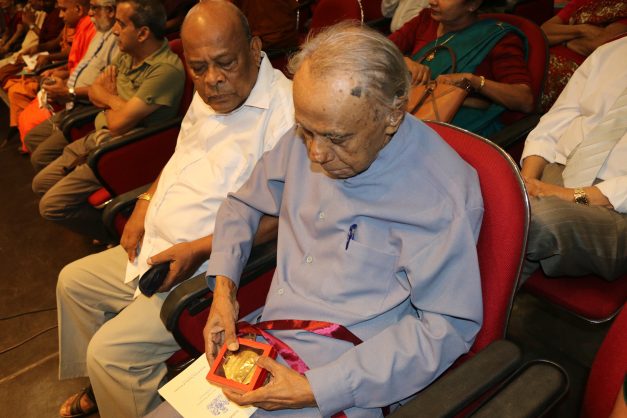 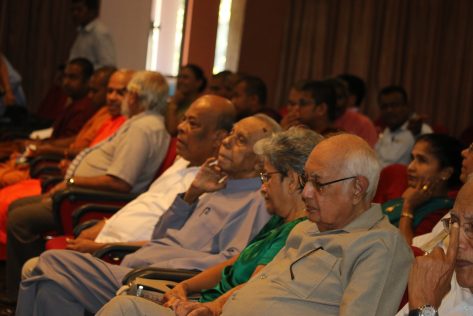 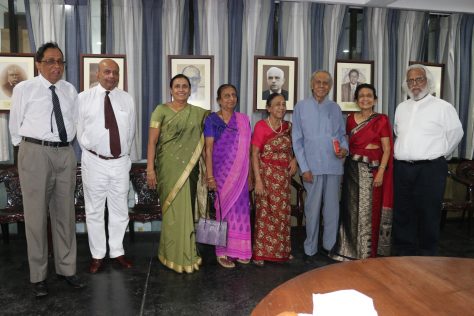