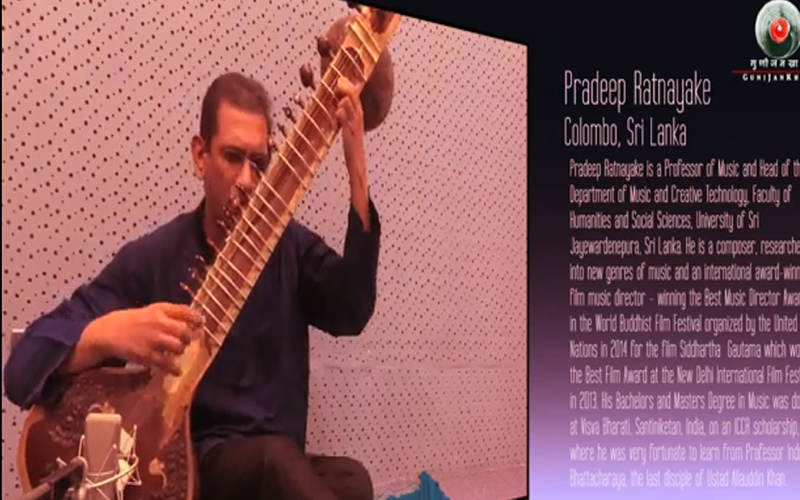 Professor Pradeep Ratnayake, Head of the Department of Music and Creative Technology, Faculty of Humanities and Social Sciences, University of Sri Jayewardenepura, was invited by Subrata De, founder of Swaranjali, Delhi, to take part in the World Sitar Festival that brought together some of the best sitarists currently performing in the world today.  It was organized by Swaranjalee in association with Pracheen Kala Kendra and Gunijankhana, for the artists to pay respect to their gurus and respective gharanas that they belong to.

Pradeep Ratnayake belongs to the Maihar Gharana, founded by Ustad Allauddin Khan and to which Pandit Ravi Shankar also belonged.  He paid respect to his gurus, Pandit Indranil Bhattacharya, Professor Sabyasachi Sarkhel, Pandit Santosh Banerjee, all who taught it him at Visva Bharati, Santiniketan, India; and his first Sri Lankan guru. Mr D.A. Devage, who himself had studied in India as a disciple of Professor Suresh Chandra Misra and D.T. Joshi of Kairagar University.

The programme started with the live streaming of the sitarists introducing themselves and their gharanas and then it shifted into their performance in a programme that had beautifully documented many aspects of the sitar, like its old masters, its structure and its making.  Invaluable recordings of the early sitar maestros were played alongside the performances of the present generation of sitarists.  The whole programme can be viewed on this link: https://www.youtube.com/watch?v=TQg4x12jEMo&feature=youtu.be&fbclid=IwAR3Vi2sYhah7H3FiinK2PDuMFeS4RUrhTAK-CPFHxYiKfMDnMMwDibbzxKM

Pradeep Ratnayake played the midnight Rag Malkauns, Alap, Jod and Jhala and the whole clip will be uploaded soon along with those of the others in the channel they have opened for this purpose.  Pradeep was among the few non-Indian invited for this event.  It brought together 32 sitarists from 11 countries.  Professor Pradeep Ratnayake was the only Sri Lankan to be invited to be in this festival.