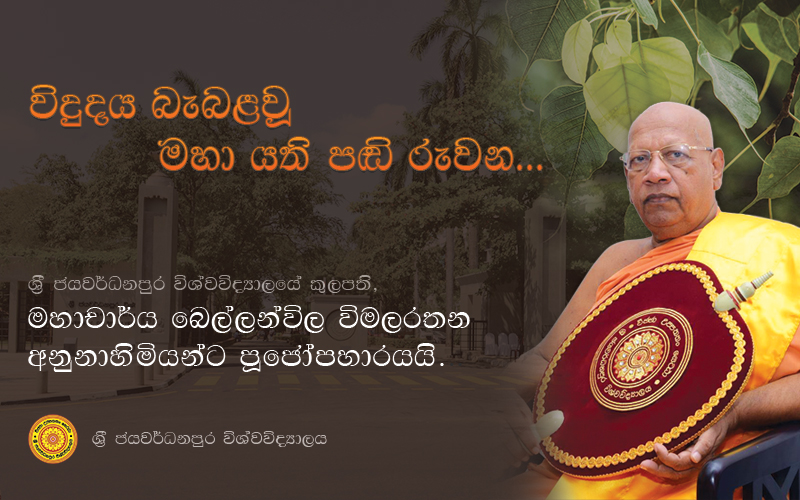 Chancellor of the University of Sri Jayawardenepura and the former Anunayaka of the Shyamopalee Maha Nikaye Kalyani Samagri Dharma Maha Sangha Sabhawa, Most Ven. Prof. Bellanwila Wimalaratana Nayake Thero has passed away following an accident at the temple on 3rd February 20148.

Ven. Prof.  Bellanwila Wimalaratana Thero has been the Chancellor of the University of Sri Jayewardeneoura since 2000. Prior to his appointment to the post of Chancellor, Ven. Thero held the position of Professor, Associate professor, lecturer and visiting lecturer, respectively, at the University of Sri Jayewardenepura.  Also, Ven. Thero has been Visiting Professor at the School of Oriental and African Studies University of London, United Kingdom.

Ven. Prof. Bellanwila Wimalaratana Thero, deputy incumbent of Bellanwila Rajamaha Vihara and President of the Bellanwila Community Development Foundation, is the former Anunayake of the Kotte Sri Kalyani Samagri Dharma Maha Sangha Sabha of the Syamapali Maha Nikaya, one of the three sects of Buddhism in Sri Lanka.

Ven Thero has, for many years, been involved with interreligious harmony in Sri Lanka, in particular with regard to easing ethnic tension in the country.

He was the 4th Child of Mr. Paul Perera and Mrs. Buthsilina lived in Bellanvila Village. He was born on 14th April 1942 and birth name was Gilbert Perera. At the age of 13 he had decided to enter the order of Buddhist monks and on 28th February 1956 ordained under the guidance of Ven. Bellanwila Somarathana Thero, his father’s elder brother. Present incumbent of Bellanwila Rajamaha Viharaya; Bellanwila Dharmarathana Thero who was become a monk in 1953 is the elder Brother of the Ven. Bellanwila Wimalarathana Thero.

Ven. Bellanwila Wimalaratana Thera, who counted more than 60 years as a Bhikkhu and died at the age of 76.

The body of the late Most Venerable Bellanvila Wimalarathana Thero will be placed at the Bellanvila Rajamaha Viharaya. The funeral ceremony will take place at the Sri Jayewardenepura grounds at 3.00 pm on Thursday (08).